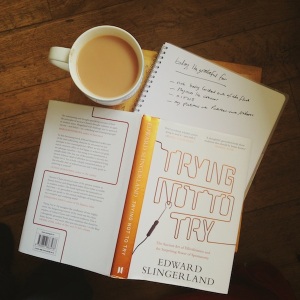 I love to find new tips and tricks from books that I can apply in my own life so I was instantly attracted to the idea of being a ‘literary guinea pig’ for Canongate’s Nudge Your World series.

The first book in the series, Trying Not to Try: The Ancient Art of Effortlessness and the Surprising Power of Spontaneity by Edward Slingerland deals with a pretty complex but appealing concept borne out of ancient Chinese philosophy – that effortlessness and spontaneity can bring you freedom and attract success. I was more than happy to test that hypothesis for a week.

Read on for the full story. 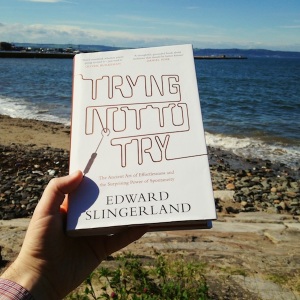 Day 1: The Paradox of Trying Not to Try

Day One of my five day experiment was mostly spent getting my head around the concepts of wu-wei (effortlessness and spontaneity) and de (the charisma that comes from living effortlessly and spontaneously), for which we have no equivalent terms in the western world.

According to Slingerland, there are similarities between wu-wei and Mihaly Csikszentmihalyi’s concept of ‘flow’, however the former is more about a deeper connection to the wider community in which we live and the ‘natural order of things’ or as Slingerland puts it “being properly situated in the cosmos”.

Early Chinese thought also emphasised practical know-how over mere knowledge – believing that our thoughts and actions are tied to emotions and our bodies (which Slingerland refers to as ‘embodied’) rather than the more logical, analytical approach of the Western world.

Of course, actually attaining wu-wei is far from easy in practice, and Slingerland devotes an entire chapter to its paradoxical nature: if you don’t try at all, then you’re unlikely to achieve anything – but if you try too hard it can be counter-productive.

If I was going to apply the complex ideas in the book to my daily life, I wanted to do it in a wu-wei way – that is, as effortlessly as possible – so on Day One after reviewing my notes about the book, I decided I would simply make some small changes to some of my daily habits and activities over the next few days in line with the four main philosophical approaches covered in the book.

Of course even these small changes involved a considerable amount of time and energy each day, once again highlighting the paradox of trying not to try.

Hear my Day One podcast on SoundCloud or below. 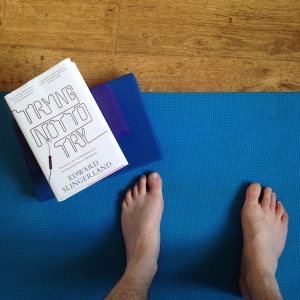 Day 2: The Confucian Way: Carving and Polishing the Self

In Chapter 3 of Slingerland’s book, he discusses the book The Analects of Confucius, which in terms of sheer numbers has influenced far more people than the Christian Bible. The Confucian approach is to ‘carve and polish the self’, which unfortunately involves rather a lot of hard work before that elusive effortlessness becomes second nature.

As Slingerland says: “For them, wu-wei could be obtained only through a lifelong program of trying, strenuously, to distance oneself from nature and move instead toward a thoroughly cultivated kind of perfection.”

To attain this perfection (and therefore wu-wei and de) Confucius practised a strict schedule of rigorous daily routines based on ancient cultural practices and religious guidelines, and reportedly only reached a state of true effortlessness in his seventies.

As a secular westerner I don’t have the same kind of strict daily guidelines to follow as Confucius but I have worked out through my own research which positive daily habits I’d ideally like to have.

I already practice mindfulness meditation and some form of creativity most days, but I have been sorely lacking when it comes to physical exercise recently. So for Day Two I decided to dust off the old yoga mat and running shoes and do something ‘embodied’.

I had to admit that doing some yoga and also going for a run made me feel very good both physically and mentally. But it certainly didn’t feel effortless. In fact, it took a lot of willpower, which as Slingerland acknowledges, we only have so much of each day.

Listen to the Day Two podcast on SoundCloud or below.

Day 3: Less is More with Loazi

Confucianism isn’t without its drawbacks – as well as the need for supreme self-discipline, you also need to remember where you’ve left your house keys. On the morning of Day Three I managed to get locked out of my house because I had left my keys in my running shorts the day before.

Once that particular problem was solved, I was ready to try an alternative approach, and thankfully the fourth chapter of Trying Not to Try deals with Laozi’s teachings which emphasise a ‘less is more’ approach.

Laozi was a Daoist who believed that we should ‘come home’ to nature itself and to our own most simple, natural dispositions and forget about book learning and artificial desires. He felt that ‘thinking and verbalising’, ‘conscious labelling and explicit effort’ and ‘comparison with others’ were all unnatural activities which led to dissatisfaction.

To put the Laozian approach into practice wasn’t going to be easy – I couldn’t retreat to a wood cabin for the day due to my other commitments. So I decided to do two things: firstly keep a gratitude journal and secondly to avoid social media (which I consider a trigger for ‘comparisonitis’ as there is always someone on Twitter or Facebook boasting about their achievements and making me feel unaccomplished in comparison).

The gratitude journal worked well in reminding me that I’m lucky enough to have reasonable physical health, loved ones, and a roof over my head amongst other things.

My addiction to checking Twitter was harder to give up however thanks to my ever-present smartphone (another thing to be grateful for of course, in theory at least) and so my good intentions in that regard lapsed well before the end of the day.

Listen to my Day Three podcast on SoundCloud or below. 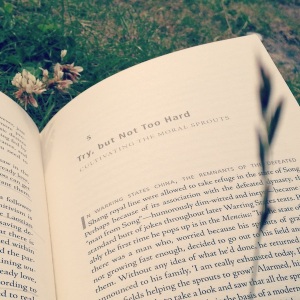 Day 4: Try But Not Too Hard (Mencius on cultivating moral sprouts)

Mencius was a Confucianist in that he believed in a certain amount of effort but he also took Laozi’s teachings into account, not least in the way he uses nature as a metaphor.

Instead of forcing ourselves to follow strict rules he believed we all have natural ‘sprouts’ of virtue that we just need to cultivate, and that to try too hard would be the equivalent of pulling the sprouts out of the ground before they have a chance to grow. Again, the wu-wei parodox is evident here.

In a way, my decision to do yoga on Day Two was already in line with the Mencian approach because it was something I actually wanted to do, rather than an edict from the ancient texts. I can also see how, at the other extreme, overdoing yoga could lead to injuries. Thankfully there is little danger of that due to my natural laziness.

Secondly, I decided that attending the Edinburgh Publishing Conference on Day Four was a way of cultivating my innate interests and could therefore be considered in line with Mencius’s teachings.

I made sure though not to overdo it when taking notes during the talks and instead spent much of my time doodling.

Listen to my Day Four podcast on SoundCloud or below. 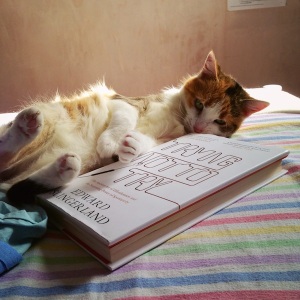 Day 5: Going with the Flow: Getting Drunk in the name of Daoism

In all honesty, Day Four and Five merged into one, because after the conference I ended up truly embracing spontaneity and getting rather drunk.

Now that might not seem much in tune with Chinese philosophy, but in fact Slingerland mentions several times that being drunk shares many of the characteristics of wu-wei, and in fact is to this day a big part of Chinese business culture not least because people who are drinking together collectively let their guard down (a kind of communal de which increases trust).

This was also the most obvious way I could think of to put the teachings of our final philosopher (and our second Daoist), Zhuangzi, into practice. Zhuangzi recommends ‘going with the flow’ and selflessness, but doesn’t say much about how to go about it. Getting drunk seemed the most effortless way to try out his approach.

Of course as a result, Day Five itself involved facing the inevitable consequences of going with the flow and living for the moment – the dreaded hangover, meaning very little was achieved all day.

Still, I had a good night, and hopefully strengthened my bonds with old friends and made a couple of new connections. Not bad for a night that definitely felt unforced.

Listen to the Day Five podcast on SoundCloud or below.

Attempting to apply 2,500 years of philosophy in five days is of course in itself a little bit ridiculous and artificial, especially when Slingerland himself concedes that the best methods of developing wu-wei will differ from person to person.

However I have learnt something from all of the approaches I dabbled with during the week. I was already a big believer in practising daily habits in order to improve both skill levels and one’s overall character and wellbeing, which is undoubtedly a Confucian approach.

In addition, as someone who is most often ‘in my head’ the idea of being embodied is a particularly compelling one, so I think I’m going to keep up the yoga.

But I also agree with Mencius that those habits need to be something that you have a natural inclination to do. If you enjoy those activities in and of themselves as well as doing them for any future benefits they might bring, they are going to be a lot easier to keep up in the long-term.

Laozi’s emphasis on ‘being happy with what you’ve already got’ is an important message in the modern world where we are constantly reminded what we don’t have by advertising and social media, so I will also add keeping a gratitude journal to my daily routine.

Finally Zhuangzi’s concept of going with the flow works brilliantly when it comes to forming genuine social relationships, with or without alcohol.

In summary, I’m sure I’ll be referring back to Slingerland’s book on a regular basis and intend to take a closer look at the original Chinese texts he mentions – which surely hold more hints about the mysterious paradox of wu-wei. That’s as long as it doesn’t all involve too much effort, of course.