Below are 20 video diaries I’ve filmed since I took voluntary redundancy in February 2012 – after ten years working in the Scottish civil service.

The videos also feature footage from a couple of adventures I went on to meet other bloggers and self-employed people from around the world and get their perspectives, including the World Domination Summit in Portland and a trip to Oslo. 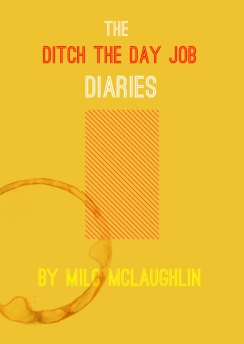 Praise for the book on Amazon:

“Milo openly shares the highs and lows of his first year of independence. Lots of humour, some bad language, and plenty of practical insights learnt by experience. If you’re thinking of working for yourself, read it. If, like me, you’re already self-employed and trying to direction, read it. Basically, read it.”

“Being a creative entrepreneur can be a lonely experience and this book, which follows Milo’s own downs and ups as he leaves his job after ten years to pursue his creative dreams, will make you feel just a little less alone.”

Buy it at Amazon.com | Amazon.co.uk & other Amazon stores worldwide.

All about working for The Scotsman’s festival site, exploring my home city like a tourist, and my coffee addiction. More info

This was a very short, experimental ‘bite-sized edition’ to announce the launch of the Mountain Shores podcast. I had hoped that by filming and editing it on my phone and uploading it direct from the phone to YouTube, it would be less time-consuming than the other episodes, but it still took quite some time.

Some video footage from my trip to Portland Oregon, for the World Domination Summit. Includes brief cameos by:

Hung Pham, a Career Consultant turned Travel Photographer whose work can be found at www.HungOnTheWorld.com. Hung is currently on a 6 months trip to China, Vietnam, SE Asia, Australia, & New Zealand. I spent quite a bit of time with Hung in Portland and found him wise, hilarious, and extremely generous. Hung was also one of the attendees invited to speak on stage at WDS.

Melissa Dinwiddie, multipassionate artist, teacher and songwriter, who treated me to an impromptu ukelele gig/lesson in the park!  It was so lovely to meet Melissa “in real life” after knowing her for ages online and admiring everything she does to help creative people succeed. We had a great conversation about creativity and life in general (read my interview with Melissa here).

Dr Elise Bialylew, a trainee Psychiatrist and meditation teacher who writes at Curiously Creating and founded Mindful in May, an online, global meditation challenge. In May 2012 there were nearly 900 people meditating from 12 countries, that raised $26,000 for Charity Water. Pretty amazing eh? Elise is such a joy to be around, being extremely insightful, funny and a real force of nature, so I was delighted to be able to spend time with her despite the fact she never seemed to stay still for long! Read my recent interview with Elise.

Jason Digges, a professional video producer, musician, filmmaker, writer, photographer, philosopher, and entrepreneur. Jason writes at Practical Art. I met Jason right at the end of my trip and really enjoyed our conversations, and hearing his deeply spiritual perspective on things, as well as the four-person bike ride we enjoyed around the river with Hung and Elise! As a long-time creative freelancer, Jason also has a lot of experience and wisdom to share.

Check out the “potentially useful tool of the week”: teuxdeux.com (was free at the time, but now there is a small monthly charge)

Here’s the related blog post: Staring Failure in the Face

The site mentioned in the video is Chains.cc

Read ‘How Advertising Has Changed Since the Days of Don Draper’

Here’s the rather rambling interview I did for Arran Arctic’s podcast.

The article I mention is by Justine Musk – how to turn your creative online platform into an art.

Justine practices what she preaches as well, for example here is an article about how she has used Pinterest to help plot her latest novel.

Fabian Kruse also makes a brief cameo in this video – read my interview with him here and his guest post about being productive anywhere here.

Episode 4: Bootstrapping a Business and Investing in Education (6 minutes)

Here are some of the resources that are either mentioned or shown in episode 4:

Episode 2: A World of Possibility (4 minutes)