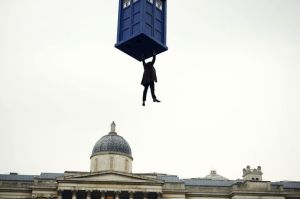 I like sci-fi because of its sense of possibility. For any creative person, it offers the ability to explore space and time, giving a potentially unlimited canvas for the imagination.

I’m also a big believer in the importance of ‘fandom’. Fans, the so-called geeks who aren’t afraid to demonstrate their love for their favourite TV shows, films, superhero characters and bands – often unjustly get a bad press.

But from music zines to cosplay to fan fiction, these fans display tons of creativity and often keep ideas alive that shortsighted industry types do their utmost to sabotage.

It’s amazing, and heartening to think that a ‘daft’ idea about a man who travels through space and time in a Police Box that is bigger on the inside than it is on the outside, could last for 50 years and bring so much joy to so many people.

Yes, that’s right – as most people will know thanks to a massive amount of hype from the BBC, yesterday marked the 50th anniversary of Doctor Who, with the Day of the Doctor broadcast simultaneously across the globe (in over 75 countries) and in 3D in cinemas across the UK.

I can’t claim to have watched every single episode of the series but I definitely hold Doctor Who in great affection, and the coverage during this anniversary really opened my eyes to the depth and variety of the storylines over the years as well as the active part that the show’s fans have played in its evolution. 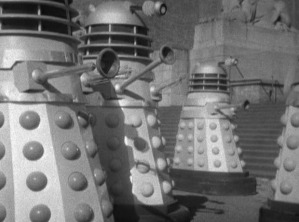 I still remember vividly the first time I saw it. As far as my memory serves we didn’t have a TV at the time, and we were visiting some friends of my parents.

I seem to remember they were in a caravan, so perhaps we were on holiday. Anyway, they had a small black and white telly and Dr Who was battling the Daleks.

I became transfixed with terror by the tiny screen as the Daleks advanced on the Doctor chanting ‘exterminate, exerminate’. It’s definitely one of my strongest childhood memories, which says a lot about the impact it must have had on me! 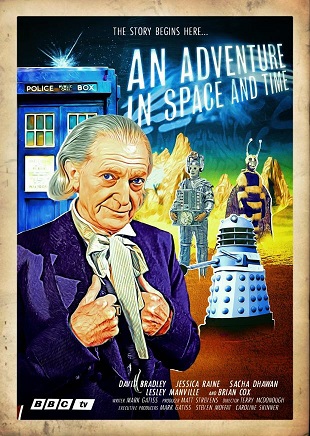 Probably the best programme I’ve watched during the anniversary celebrations was the drama about how it all began, An Adventure in Space and Time, directed by Mark Gatiss (League of Gentleman, Sherlock).

At first I was a bit unsure of it because the initial tone made it seem like more of a jolly romp than anything insightful, but thanks to a spellbinding performance by David Bradley as William Hartnell (the first Doctor, who he looks uncannily similar to) it ended up being an extremely moving story.

There was also a great Culture Show documentary presented by Matthew Sweet (clearly a fan) about the series over the last 50 years. It was fascinating to hear that Douglas Adams, creator of the Hitchhiker’s Guide to the Galaxy, worked on the show for several years during the Tom Baker era.

Many of the show’s biggest fans who got hooked on it growing up continued its legacy during the 15 years it was off air, recording their own radio plays and writing fan fiction. Some of them even ended up working on the show when it came back – which reminded me of a recent story about how “enthusiast droid builders’ have ended up getting hired to make R2D2 and friends for the new Star Wars film coming in 2015. 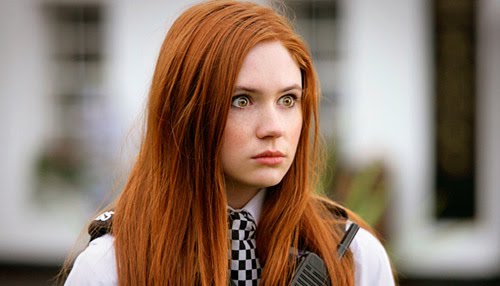 The Day of the Doctor itself was ridiculously over the top of course, but very entertaining with it – David Tennant and Matt Smith make an excellent double act and Billie Piper was great. (Though I would have liked to have seen Amy Pond making an appearance.)

Lisa-Marie Ferla, writes an excellent, insightful review over at the Arts Desk, pointing out that John Hurt’s part was probably written for Christopher Eccleston originally, but the idea of another, previously unheard of Doctor was probably introduced when it became clear that Eccleston didn’t want to take part. 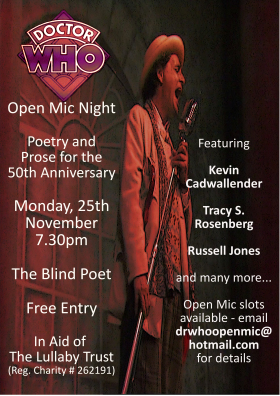 The BBC’s Live show after though was a shambolic mess, and I’m sure Eccleston was thanking his lucky stars he wasn’t involved in the One Direction phone in!

Still, a click of the red button revealed the highly amusing Five-ish Doctors Reboot, directed by Fifth Doctor Peter Davison and featuring tons of cameos – which more than made up for it.

Anyway, all of this was a long and drawn out way of leading up to this: on Monday 25th November I’m going to be doing a reading at this Doctor Who themed spoken word event, as announced by Ali George on her blog. My reading isn’t strictly Doctor Who related, but it does fit in with the space theme.

If you share any interest in sci-fi or spoken word, it would be great to see you there – there might even still be a few spots left.

Note: I’ve linked to the programmes mentioned on the BBC website where they can still be watched if you live in the UK.

2 replies on “Doctor Who Delights”

With the possible exception of that after-party shambles (which I didn’t see, fortunately!), I thought the BBC’s anniversary celebrations were spot on. Plenty of good stuff that just avoided overkill. I haven’t had chance to watch AAISAT yet, though I’m excited to do so, and the Culture Show documentary was good (I knew Douglas Adams had been involved with the show, but I had no idea he took on board so much of the writing workload!).

The big bonus for me was a chance to see the original four-part story that kicked the whole thing off. I’d never seen anything older than a few John Pertwee stories, so the chance to watch An Unearthly Child was too good to pass up! I thought the opening episode was really good, and set the series up in a wonderful manner – it posed lots of questions about this mysterious man, with a couple of answers to keep you satisfied for a while. The other episodes were a little less effective – too much caveman politics! – but I’m so pleased to have been able to see it.

I see there’s a few of the classic series on Netflix, so I might dip into them as a bit of light relief from Breaking Bad…!

Was the piece you read at the open mic night something you had written yourself? Wish I could have come along to the evening, it sounded like a great idea!

Hi Paul, glad you enjoyed it too! Unfortunately I didn’t have time to watch the original episodes, but hope that I can catch them at some point.

Yes it was a poem/lyric – not about Doctor Who but space-related! It was a really entertaining event!