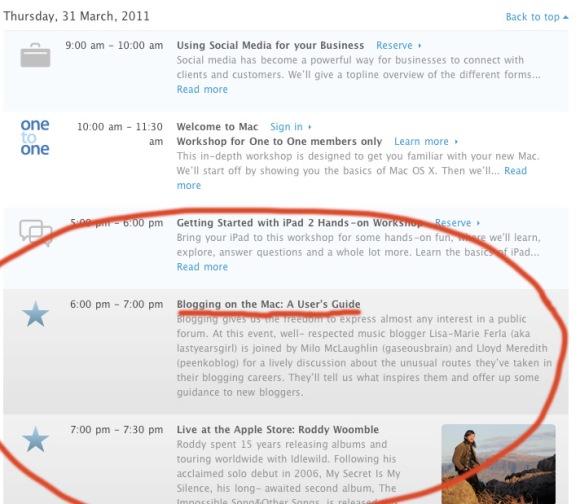 This evening (Thursday 31st March) I’m speaking about blogging at the Apple Store in Glasgow, along with fellow Scottish bloggers Last Year’s Girl and Peenko (us three were also amongst those interviewed by Ten Tracks about music blogging recently).

If you’re in Glasgow and around between 6 -7pm it would be great to see you (Roddy Woomble of Idlewild is playing a solo set afterwards if that helps persuade you!)

How I Stopped Worrying and Learnt to Love the Tech

I was actually quite slow to get the tech bug, for example I didn’t get a mobile phone until relatively late and I was fairly clueless when it came to computers until the last few years.  My first ever blog post was in July 2005 so I was by no means an early adopter of blogging either , although 6 years is quite a long time now that I think about it.

Since I bought my Macbook a few years ago and then an iPhone, I’ve become a bit of a fan of Apple’s products, and I’ve also become quite a geek generally. For over a year I  spent a fair chunk of each day reading blogs and trying out new web and mobile apps, and although my attention has now expanded  to many other things, I still have a keen interest in modern technology, the internet and the latest gadgets (not that I can afford as many as I’d like).

I’ve come to the conclusion that it’s essential to embrace technology if you want to further your creative goals – even if you’re not a blogger.

Note: If you do want other people to find your creative work having a blog is still the best way to get the word out and connect with people online. I may be preaching to the converted on this point though!

Technology Can Help You Go Pro

Obviously technology can help you with the actual act of creation – e.g. Michael Nobbs is now using an iPad for his drawings – and there are powerful programmes like Adobe Creative Suite which are used by designers, photographers and video editors. If you put the work in, these packages can allow you to present yourself in an extremely professional way, allowing you to compete with established creative pros when selling your work.

And whilst decent tech is certainly not cheap, these days you can create things on a reasonable well-powered laptop that would have been unimaginable less than a decade ago. The fact I can now film and edit HD video on my iPhone is mind-boggling to me, not just because I’m a lover of all things Apple and shiny, but because of what it allows me to do – film footage anywhere I am, and share it to the world via my blog.

Technology allows you to connect with the world

Using Skype, I’ve interviewed some of my favourite musicians like Bonnie Prince Billy and Regina Spektor, and received coaching and seminars on a variety of topics from people I like and admire from all over the world. I’ve made a bunch of friends on Twitter, and I can keep in touch with family and friends from all over the world on Facebook. I’m old enough to remember when NONE OF THIS WAS POSSIBLE. It wasn’t that long ago.

Hell even MySpace, which is now dead to me, was useful at the time. I remember when there was as much a buzz about it as there is now with Twitter. My music was appreciated by a few crazy people in different parts of the world, even though most people found it unlistenable tosh!

And I’m delighted to say a bunch of amazing creative people from all over the world read this blog. That’s one of the most exciting things about blogging for me.

Staying aware of the latest trends keeps you one step ahead

Now believe it or not, I’ve never been massively comfortable with bragging about myself. The beauty of blogging and social media means you don’t have to boast about what you’ve done, you just have to show the evidence and it will speak for itself. But on this occasion I’ll make an exception (didn’t take much persuading did it?) as I want to show you how being up to date with the latest trends can be of benefit.

Here’s some stuff I’ve achieved because I’ve embraced technology and the latest trends:

And I”m not even a proper early adopter! There’s loads of people out there who are way ahead of me, but the fact is that by at least being aware of what’s going on in the world of technology, I can foresee trends and take advantage of them if I’m able to.

True, a lot of people have blogs these days, and not all of them are that great. But if you’re not in the game, you’re never going to win. Social networking sites aren’t going to cut it – look what’s happened to the aforementioned MySpace.

Writing for other publications is all very well but you need your own web ‘real estate’ if you want to get people to visit you and follow you over time. You need your own blog (preferably on WordPress) and you need to keep it up to date if you’re really serious about spreading your work to as many people as possible. Of course if you don’t want to to do that, then fair enough but if you’re reading this I’m guessing you probably do!

Just do yourself a favour – include a link so people can subscribe by RSS and email – and use Feedburner so that they can subscribe using their favoured feed reader without having to copy and paste the link. Okay, only obsessive blog readers like me might use RSS, but they’re exactly the people you want as long-term readers as they are more likely to share your stuff with other people.

Technology allows you to teach yourself pretty much anything

This might be the biggie. You can pretty much learn anything you want in terms of creative skills with the information that’s now readily available online.

Personally my first port of call is always books, and I now read a combination of print books and ebooks, either via my Kindle or downloaded directly from the website of the author. You can find info for free on pretty much anything if youre willing to take the time, and there are also a bunch of useful info products and subscription services which will distill this infiormation into an easy to follow guide and even provide it in audio and video formats (though you do need to be somewhat cautious about which of these you invest in).

YES, TECHNOLOGY CAN BE A PAIN IN THE ARSE.

Technology is never perfect, and I have to admit I do get frustrated sometimes when trying to use technology but that’s mainly because I either haven’t taken the time to learn something properly or am trying to do too much too quickly, without proper preparation.

And of course being online all the time does have it’s disadvantages and can be hugely distracting and that’s something we all need to learn how to deal with if we’re to stay sane and clear-minded.

What’s worse,  environmentally and ethically there are a huge amount of issues with the sourcing of components and the disposal of obsolete tech.

But it’s hard not to see the positive sides. technology and the internet levels the playing field (at least it does for the time being) and allows anyone who’s got a creative urge to set up a website and get their work out there.

Of course the amount of effort and time involved in doing that is not to be underestimated, but I think it’s fair to say that technology currently gives creative people an opportunity that even 15 years ago would have been unimaginable. Who knows how long it might last? Get on board while you can.

By the way if you’re in the UK you might want to join the protest against the Government’s proposed web blocking scheme which will erode our freedom of what we can access online – could be the start of a slippery slope..

2 replies on “Why Embracing Technology is Essential to Creative Success”

Really interesting stuff, and heartening too (though not so much the bit about “preferably WordPress”, as it shows up my potential for laziness in that I picked Blogger simply because I already had a Google account!) Of course though, it’s the quality of what gets posted that’s most important.

If I might include a shameless link, I actually found myself writing the other day about how useful I find Twitter and whether I use it ‘the right way’ to suit my needs:

The C-MC blog has definitely made me look differently at how I try and interact with people through technology in recent weeks, and hopefully do so in a more efficient manner. Saying that, I daren’t get a smartphone of any sort for fear that I would end up on the internet ALL THE TIME.

I like to try and have some downtime when my computer’s off, maybe to read a book or (less successfully!) go outside and enjoy some fresh air. That attitude means I rarely adopt anything new, preferring to settle for what I know. For now, For now, I remain a quick-enough learner that I can embrace ‘new’ things when I do finally try them, but I suspect I’ll always be behind the curve to some degree!

Yes I think WordPress is the most flexible platform and generally viewed as a little more professional, but blogger is fine too, I know quite a few successful bloggers who use it, including Peenko.

There is quite a bit of spam on Twitter but if you seek out people with similar interests then you can hopefully end up with mainly real people following you!

It’s true that having a smartphone is addictive and I think you’re probably quite sensible not to get one and avoid the urge to always be online, it is a balance that I still find quite difficult to find and I talked about it a good while ago on my personal blog (please excuse missing picture): http://www.gaseousbrain.com/consumption-vs-creativity/